We have chatted recently about the incredible growth of Draw Something.  Viral growth that is just staggering.  Here is a quick summary of what has happened at Draw Something. I posted these statistics two weeks ago so I am sure they have gone up.

Some fun facts about Draw Something:

Pretty impressive stuff.  And now a new player has joined the scene (pun intended). The application is called Doodle.ly – www.doodle.ly.  It is only available on the iPad right now but given the huge interest in Draw Something, this will likely be the next destination for the artist inside all of us.

The site, which describes itself as “a social sketchpad for self-expression, creativity and inspiration” lets you create and share your wonderful pieces of art on Twitter and Facebook, as well as on the Doodle.ly site. The cool part about Doodle.ly is that you can run into some amazing artists randomly, so this site is set up just for that.

If you find a piece of art that you like, you can share it on Facebook, Twitter, Google+, Tumblr, or pin it on Pinterest.  The Doodle.ly iPad app brings a much better drawing experience, and has the pencil, ballpoint pen, highlighter, marker, and eraser that the site lets you use. You’ll also be able to browse work done by others, which will surely help the network grow once it gets more social features.

Take a look at this doodle.  Many artists out there just starting to tap into their creative sides.

Take a look.  I am not much of an artist, but always amazed by how creative people can be.  The Doodle.ly iPad app takes this to the next level of social engagement.  Do you think Facebook will buy them for a billion dollars, like Instagram?  Stay tuned.

We covered Draw Something last week, but so much is happening so fast we needed to do a quick follow-up.

Quick reminder – Draw Something is a highly addictive social drawing game available for Apple iOS and Android Devices.  You draw and guess words, play cooperatively with friends or competitively with rivals.

So what are the updated statistics:

Check out these Draw Something drawings – these folks are good. 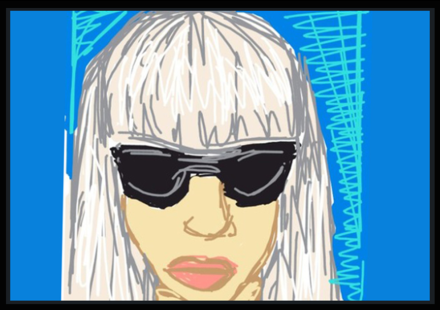 Go and download the app from the Apple or Android stores and give it a try.