I have three daughters and to say that their phones are important to them would be an understatement.  The days of talking on the phone are over for their generation.  Really no need to have a voice plan for the children and they do not ever use it.  Text on the other hand, downloading content, uploading pictures to Instagram, Facebook, Pinterest and the like, now we are talking.  I just received a text message from Verizon saying that one of my daughters had already used half of her monthly data plan and we are only a few days into the billing cycle.  Geez!

As a parent it is always amazing to me how much time my children spend on their phones.  I am sure many of you are wondering as well. 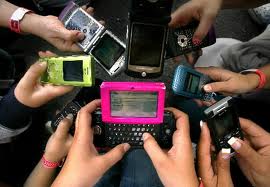 Just came across some updated information on teen phone usage – Parents, you are not alone 🙂

Information for this blog was sourced from a very cool infographic I found on www.visual.ly – here is the link – http://visual.ly/those-phone-crazy-teens